Have you ever gone somewhere and been sorely disappointed?  A couple days ago, I went to the farmer’s market.  Now let me tell you…I love going to the farmer’s market.  I have a designated huge market bag, disposable individual produce bags, and cash in small bills.  I go prepared.  And from the local Cowgirl Creamery cheese and fresh Hog Island Oysters at the Saturday San Francisco market to the fresh tamales and smell of roasting green chilies at the Pearl Street market in Boulder, Colorado, I have nothing but great things to say about farmer’s markets that I’ve visited.  I even enjoyed the small, but abundant market in Arlington, Texas.  But Vegas? I was disappointed.

Now, I’m not saying that the people weren’t nice.  The people were incredibly friendly and gracious.  And I’m not saying that what I bought wasn’t good.  The produce I purchased was fresh and delicious.  But I am saying that this event (all ten vendors included…and I’m being generous by saying ten) wasn’t really a farmer’s market.  With only two booths dedicated to produce, it was really just a handful of neighbors sitting around selling their goods.  Maybe it’ll get better as the growing season progresses.  Or maybe I should just lower my expectations.  Anyway, I’m done complaining.

Let’s get something straight though, I am excited about what I purchased.  I bought some okra, heirloom carrots, zucchini, summer squash, and jalapenos, From the $20 haul (some of which is not in the picture as I split some with my mother) I was inspired to make several dishes.   Go and explore…I hope you have a good farmer’s market nearby!! 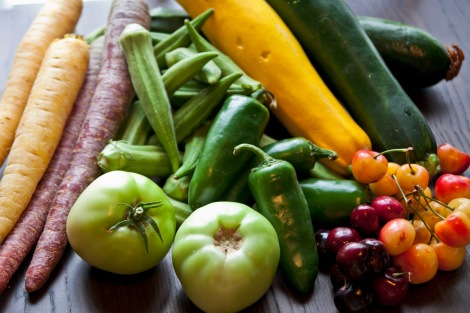 edit: As I was writing this post, life went on, as it always does. I was so incredibly busy that I ended up planning/cooking an entire week of food using what I bought at the farmers market.  Rather than writing one uncomfortably long post with all recipes, I decided to separate them and post them individually as I feel inspired.  Thanks for your patience.  By the way, where the heck did June go?